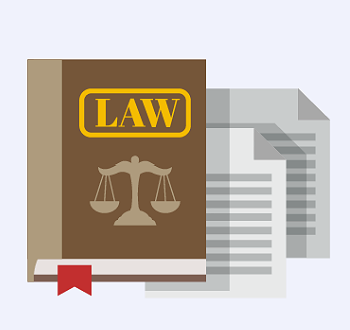 Most workers in the United States are entitled to overtime pay, which should kick in after you clock in more than 40 hours worked in a given week. Since the typical overtime wage rate is 1.5 times your regular rate of pay, this premium pay requirement has been given the nickname “time-and-a-half.”

What Is Double Overtime?

Some employees, however, are entitled to more. Double time pay would see a worker paid at twice their regular pay rate, rather than the normal overtime pay of one-and-a-half. That can make a big difference, especially when it’s also coupled with overtime, but double time doesn’t apply to the vast majority of workers.

The Department of Labor hasn’t established a ‘double time definition’ at a federal level so, unfortunately, there are no national requirements to compensate workers at twice their regular rate for overtime pay.

Up next we discuss where, and when, double-overtime does apply. 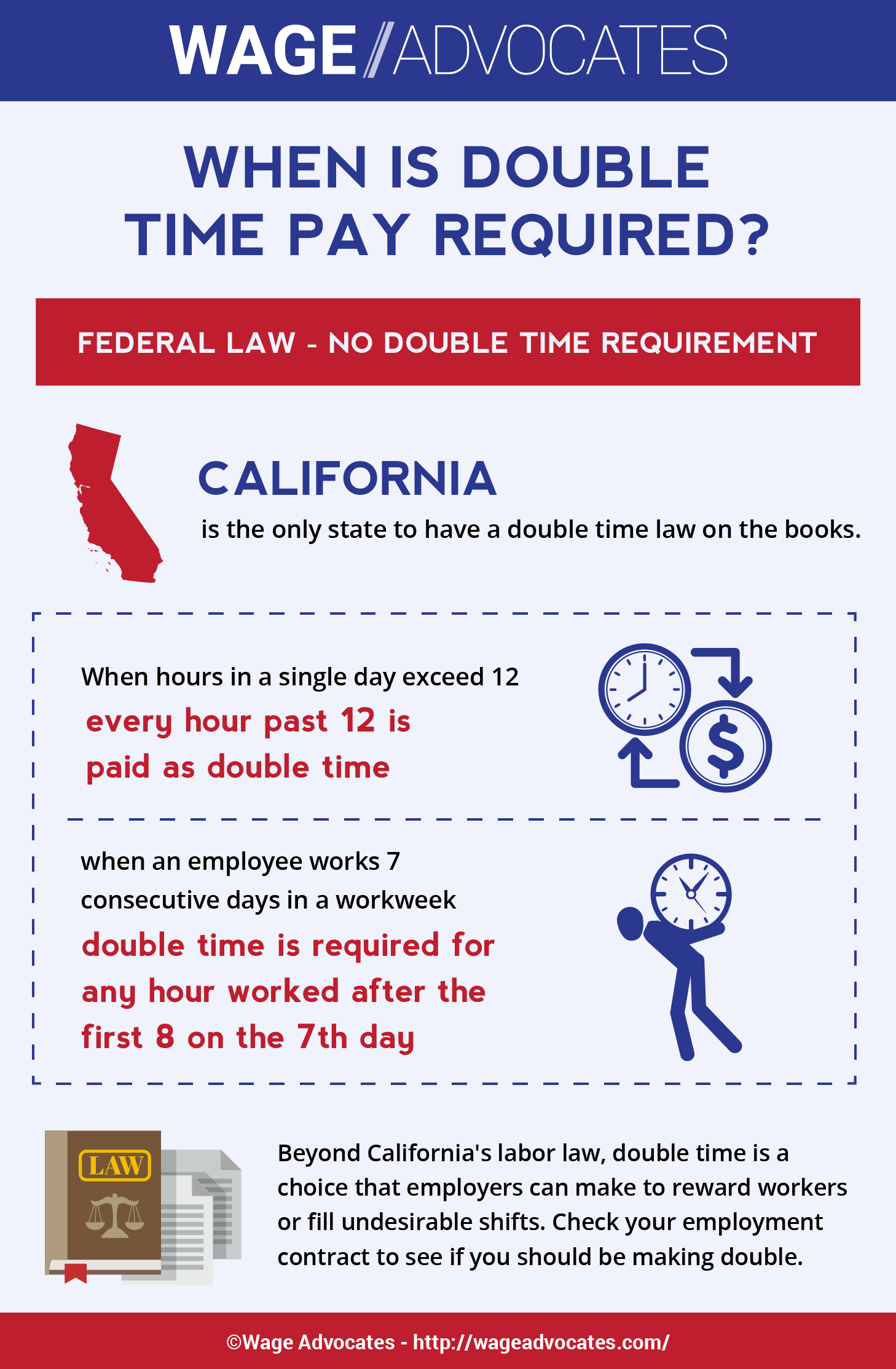 Want to share our double time infographic on your own site? Just copy and paste the code below:

In addition to the federal law that governs overtime pay requirements (the Fair Labor Standards Act), most states have passed their own additional laws to establish overtime pay regulations. While many states have set minimum wages that are more generous than the federal minimum wage, only one state has made a similar change in relation to overtime. That state is California.

According to California’s Department of Industrial Relations, eligible workers in the state become entitled to double-time pay in one of two cases:

Before moving ahead, we should mention that California’s labor laws are unique in many ways.

In contrast to federal regulations, along with the laws in other states, California doesn’t limit itself to calculating overtime wages based on weekly hours worked. In addition to weekly overtime pay, California also requires that eligible (or “non-exempt”) employees get paid overtime for all hours worked over 8 in a single workday. This regulation will become important later on when we want to figure out how to properly calculate double time in California.

How Is Overtime Calculated In California Overtime pay isn’t really calculated on your normal hourly rate, though. Instead, employers should use an employee’s total non-overtime compensation to arrive at an overtime rate.

That means some payments that aren’t an hourly wage, like bonuses and commissions, may have to be included in the overtime calculation for a given week.

Double Time On A Salary

Things are a little more complicated for salaried workers, many of whom are entitled to overtime wages. To calculate your double-time pay rate on a salary, you’ll have to convert that lump sum compensation into an hourly rate. This hourly rate conversion changes from week-to-week, depending on how many actual hours worked you log. You’ll also need to check your employment contract to see how many hours per week your salary is intended to cover; the standard is usually 35 to 40 hours.

To arrive at your double-time rate, just double your regular rate (multiply by two. ) For the example above, your double time pay rate would be equal to $20 times 2, or $40 per hour.

Here are a few examples to help you understand California’s double time rules, which can get tricky.

Over 12 Hours In A Single Day

Lucy works 14 hours on Monday. She’s covered by California’s wage regulations, so her employer will have to calculate overtime wages. Her time for the day actually exceeds 12 hours, though, so she’ll be in line to receive a double-time pay rate, in addition to normal overtime pay.

You can think about Lucy’s day as three distinct chunks of time:

Assume that Lucy normally makes an even $10 hour per hour. That’s how much she’ll make for her first eight hours, for a total of $80 in compensation. To arrive at Lucy’s overtime wage, all we need to do is multiply her regular rate of pay by one-and-a-half. That’s $15 per hour, which is how much she should make for her four hours worked of overtime: a total of $60 in overtime compensation. To finish the picture, we’ll need to calculate Lucy’s two hours of double time at a rate of $20 per hour. That’s $40 for the double time component. Add up all of Lucy’s compensation and she should be paid $180 for her single twelve-hour day.

What is a workweek? According to both federal and California state law, a workweek is a regular, re-occurring period of seven 24-hour days. In short, workweeks don’t need to start on Monday.

But for the sake of simplicity, let’s say that, like most employees, your work week runs from Monday to Monday. The important point to note, at least for our example, is that your workweek resets every time Monday rolls around. If you work all seven days between one Monday and the next, you’ll come under California’s double-time regulations and be entitled to double-time pay for any hours that you work over 8 hours on that seventh day.

Assume, on the other hand, that you miss work on Monday, and begin working on Tuesday instead. After that, you work seven consecutive days, ending on the next Tuesday. The problem is that, while you worked seven consecutive days, one of those days fell outside a single workweek. That last Tuesday just doesn’t fit into your normal Monday-to-Monday scheme. In this case, you wouldn’t be entitled to double-time pay on the seventh consecutive day, despite all your hours of hard work.

The real consideration, then, is whether or not you worked every day in one workweek. If so, you would be entitled to the double pay rate for all time worked over 8 hours on the seventh consecutive day. If not, you may be out of luck.

How Does Double Time Work?

Outside of California, the overtime pay rate is always “time-and-a-half,” or 1.5 times your regular rate of pay.

In some situations, though, the state law doesn’t matter, because some employers offer double-time compensation, often on top of overtime, with the hopes that promising to pay double will attract employees to work shifts that are usually undesirable. You might see double-time incentives offered for work on federal holidays, for overnight shifts, or, in rare cases, on weekends. 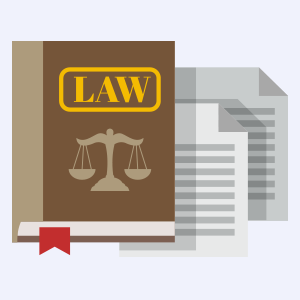 Keep in mind that the federal Fair Labor Standards, which regulates basic payroll practices in America, does not require employers to pay double-time wages.

Double time is a choice that employers can make, either to reward their employees or to fill shifts that no one really wants to take. That’s why you should find any double-time pay requirements in your company’s employee handbook, rather than research federal labor laws.

Union workers may be an exception. Some union contracts provide for a double-time pay rate, especially on really long days of work, but you’ll have to check with your own contract to know if double-time (in addition to overtime) applies in your case.

What happens in the event that you’re not being paid overtime correctly? Most workers have two basic options, either contact the Department of Labor to initiate a claim or file a wage violation lawsuit against their employer.

To learn more about your rights, feel free to contact our experienced wage and hour attorneys today for a free consultation.