Mandatory Overtime For Nurses – Is It Legal?

The Fair Labor Standards Act, a federal labor law that outlines the rules for minimum wage and overtime, says that the vast majority of American workers should be paid at premium rates for working extra hours. But the Fair Labor Standards Act doesn’t set any limit on how many hours an employee can work in a week, and most employers are well within their legal rights requiring employees to work overtime.

In other words, mandatory overtime is legal for most employees.

If you don’t like how long your labor shifts are, your only viable option is to quit. It might sound crazy, but a company can force you to work longer 40 hours per week.

Hospitals, specialized care centers and rehab facilities across the nation have made mandatory overtime for nurses a standard practice.

America is facing a nursing shortage, according to the American Association of Colleges of Nursing. As the Baby Boomer generation ages, an unprecedented number of patients have decline in health and require assistance. All of these patients need care, and they deserve expert care. But many healthcare facilities are facing chronic staffing issues.

Rather than investing in ways to keep good caretakers on the job, most hospitals and nursing homes simply force their existing workers to work longer hours. Unsurprisingly, this can often lead them to “burn out.”

Not only is mandatory overtime for nurses exploitative, but it also diminishes the quality of patient care and, ultimately, their health. Indeed, studies have found that overworked staff raises the risk of errors and adverse events.

In most industries, forced overtime is perfectly legal. But for workers in the healthcare industry, the situation may be different.

Thankfully, a number of states have stood up to extended labor hours in the healthcare industry, either by prohibiting the practice altogether or severely limiting an employer’s ability to require it.

So far, eighteen states have passed legislation or instituted regulations on mandatory overtime in the nursing industry:

Before we dive into the specific provisions contained in these laws, we’ll cover the requirements that most of them share in common.

Most of these state laws say hourly employees need reasonable, predetermined schedules, and that once their shifts are scheduled, they can’t be forced to work more than that.

Where an employer’s right to enforce mandatory overtime has been limited, nurses are usually still allowed to work longer if they so choose. A few states, on the other hand, have set absolute maximums beyond which most healthcare assistants can’t work, whether they want to or not, namely due to patient safety concerns.

Most states have also made federally-operated healthcare facilities “exempt” from their overtime regulations. For LPNs and RNs employed at VA and other public hospitals, forced overtime may still be legal. This “government-run” exception usually doesn’t apply to state or municipal facilities.

In Alaska, mandatory overtime is illegal. Nurses cannot be forced to work beyond their regularly scheduled shifts.

They may elect to work overtime, but no shift can last longer than 14 consecutive hours.

In California, mandatory overtime is prohibited by regulation, and nurses have the right to refuse overtime free from any fear of retaliation.

Moreover, these same health care workers cannot be required to work more than 12 hours in a 24-hour period, except in cases of emergency.

In Connecticut hospitals, nurses are guaranteed predetermined work schedules, and cannot be forced to work longer than their scheduled shifts.

Exceptions exist for the completion of procedures and emergency situations.

In Illinois, hospitals are only allowed to require overtime for nurses in cases of unforeseen emergency. Even in cases of emergency, nurses cannot work longer than 4 hours beyond their scheduled shifts.

After remaining on the clock for more than 8 hours, hourly nurses in Maine must be given at least 10 consecutive hours off.

Exceptions exist if a nurse or other health care professional has critical skills that become necessary in some situations, or in the event of an emergency.

In Massachusetts, involuntary overtime is illegal. Employees cannot be forced to remain beyond their regularly-scheduled shifts and no shift can exceed 12 hours in one day.

An exception exists for emergency situations in which a patient’s safety is in jeopardy and no reasonable alternative can be found. In this case, the nurse can be required to remain on-the-clock.

In Minnesota, mandatory overtime is illegal. 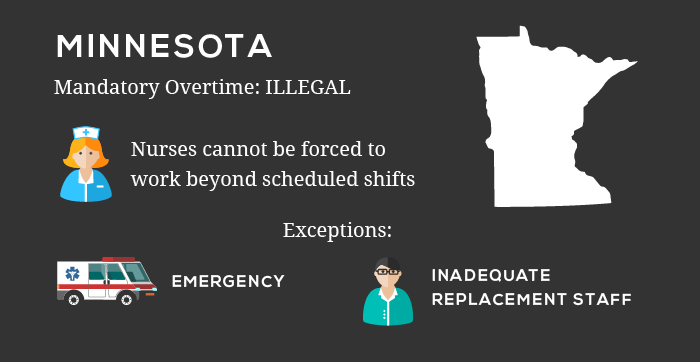 Employers are prohibited from taking any action against a worker who refuses to work more than a “normal work period.” The normal work period is defined as 12 or fewer consecutive hours in accordance with a predetermined shift schedule.

As in most states, an exception exists for emergency situations. But unlike other places, Minnesota law considers times when replacement staff are unable to report for duty an emergency.

In 2007, a nurses association was able to get this law extended to cover health care employees of the State of Minnesota, except those working in facilities overseen by the Department of Corrections, like prisons.

In Missouri, regulations require that hospitals and other healthcare facilities develop and follow organizational policies for employee overtime.

For LPNs, obligatory overtime is a violation of state regulation, except in the case of unforeseen staffing shortages where patients’ safety is put at risk. Prior to mandating an LPN works longer than scheduled, the facility must make a “reasonable effort” to find additional staffing some other way.

In New Hampshire, forced overtime is illegal. No medical facility can require RNs, LPNs or licensed nurses to labor in shifts longer than 12 consecutive hours. Naturally, exceptions exist for true emergency situations, including when healthcare professionals may be participating in surgical procedures. In these emergencies, if the shift is longer than 12 hours, the employee is then entitled to 8 hours of time-off immediately afterward.

In New Jersey, mandatory overtime is illegal in nursing homes and hospitals. Employers are prohibited from requiring that hourly nurses labor for longer than a mutually agreed-upon and regularly scheduled shift every day.

The number of hours in a workweek can exceed 40, but healthcare facilities aren’t allowed to force employees to take a longer shift.

In New York, mandatory overtime is illegal. Workers cannot be required to work longer than their regularly scheduled shifts, except in case of emergency. Nurses can freely choose to work longer than the standard shift. For those who choose to refuse the extra time, their lawful decision cannot be construed as patient abandonment or neglect.

In Oregon, the forced labor practice is illegal. Employers can’t require a staff member to work more than 48 hours in one week or longer than 12 consecutive hours in a day. Hospitals can only require longer-than-normal shifts for certain, generally unforeseeable emergency situations. Even in the event of an emergency, no person can work for more than 240 minutes beyond their regularly-scheduled shift.

In Pennsylvania, a worker can’t be required to stay over the length of their predetermined shifts, except in the case of a catastrophic event declared by an official entity.

In Rhode Island, employers are not allowed to require that staff members work longer than a predetermined shift, and no shifts can be longer than 12 hours. Exceptions exist for emergencies, but in most cases, Rhode Island law limits the definition of “emergency” to truly catastrophic events like disasters declared by a state authority.

In Texas, most employees have every right to refuse an extended labor period and cannot be retaliated against for making that decision.

Note that Texas’ Health & Safety Code defines “overtime” as laboring beyond a scheduled amount of time in a day, or days in a week, not a specific amount of hours.

In Washington, obligatory overtime is illegal, both in hospitals and convalescent homes. Employees are also protected from being disciplined for refusing to do so.

In West Virginia, forcing an employee to labor longer than a standard shift is illegal, and legislation prohibits employers from punishing those who refuse to comply. Employees cannot complete a shift that is longer than 16 hours in a single day, and any labor period exceeding 12 hours must be followed by a significant period of rest.

Does On-Call Time Count Toward My Regular Shift?

Many of the regulations we covered state that nurses can’t be forced to remain at work for longer than a “predetermined,” regularly-scheduled shift. Some states set a limit to how long those shifts can be but others leave it to hospitals and their staff members to hash out the actual length of a shift.

But what about “on-call” time, when nurses have to be ready to spring into action but aren’t necessarily contributing to their “hours worked”?

On-call time doesn’t count toward your hours, or your “working overtime” pay rate until you’re called. After that, you’ve begun working and that time should be counted as such. Nevertheless, most states expressly prohibit placing healthcare workers “on-call” as a last-ditch attempt to cover an open shift.

When Is Mandatory Overtime Illegal For Other Workers?

Overtime only becomes illegal if your employer fails to pay you higher wages for the extra time. That’s a wage and hour violation, a very real form of theft threatening the livelihoods of millions every year, and it may entitle workers to collect double the back wages that were not adequately disbursed.

Download our full Mandatory Overtime In Nursing: A State Law Overview infographic by clicking here. You can embed the infographic on your own site by using the code below: